Alice is a quiet, disturbed and beautiful girl. She has run away from her home in England to escape her violent Step-Father but abandoning her sick mother. We find her hiding in an isolated village in Japan, haunted by the Monsters of her past. Alice meets Jake, a traveling business man who is immediately attracted to her, but she is too shy and untrusting to speak to him. Alice’s half-sister, Zoe, arrives in the village and delivers the earth-shattering news that Alice’s mother is dying. Zoe begs Alice to come home with her on a flight that leaves from Tokyo in four nights. Conflicted, Alice’s heart tells her she has to go home, but her head tells her she can’t. She bumps into Jake again and he tells her he’s going to Tokyo and if she ever finds herself there to give him a call. That night while Alice sleeps a Monster appears outside her hotel, breaks into her room and drags her away into the wilderness. She wakes up in the middle of nowhere completely alone except for the Monster who is watching her through the trees. She runs but he follows. She struggles across the landscape trying to escape the Monster but no matter where she goes he is there. When she can’t go on, exhausted, empty and begging to go home the Monster finally catches her. But he doesn’t hurt her... he carries her. They complete each other. Yin and Yang. The Monster shows Alice the way to Tokyo and when she arrives she tries to call Zoe, but there’s no answer. Alice not knowing anyone else in Tokyo calks Jake. The horrors of history have a habit of repeating and Jake turns out to be a Monster just like her Step-Father. Jake drugs Alice and drags her back to his Hotel room. But as he begins to undress Alice... Jake meets a real MONSTER. 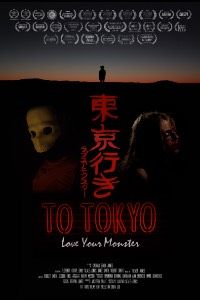